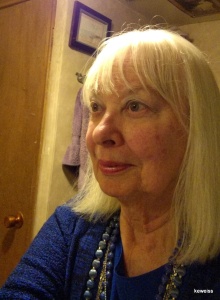 I believe we are all prejudiced against some things and towards others… philosophies, literary genres, styles of art, religions, nationalities, climates and geographical locations.  You name it and each person will have preferences and their own irrational attitudes on most subjects.  We often express these in terms of endearment or derision: (“I love purple and I hate orange.”)  … pronouncing judgement and giving our opinion as fact: (“dogs are smarter than cats!”)

In most cases these are personal idiosyncrasies that harm no one except, perhaps, ourselves by limiting our perspective on a subject and causing us to appear uninformed if not totally wrongheaded.

But there is a more subtle and deeper sort of prejudice that verges on discrimination, elitism, and even racism without our being aware.

As a white woman, growing up in a Midwestern American small-town, in a Protestant middle class family, and as the only child to devoted loving parents, I have known nothing at all of poverty, social displacement, war, or famine.  I have lived a life of privilege within a cocoon of liberal idealistic complacent safety.  Furthermore, I have been blessed with good looks, intelligence, and talent. Along the way, I have gathered a large circle of wise and interesting friends.

So, I have believed myself to be above petty prejudice.  I see myself as open-minded, thoughtful, and capable of achieving worthy goals.  I have attained some rather undeserved status, made my small mark in a chosen profession, experienced a variety of life-styles through the passing years, and envision myself contributing to the greater good.

It comes as a shock to discover how conceited I can be; how quickly judgmental I sometimes feel; and how very often I see others as ‘less than’ or ‘ignorant’ or ‘unattractive’.   I realize that I am not ‘color-blind’ either, for I notice ethnic and racial differences even if I don’t judge them negatively.  It is a form of snobbery, and I feel ashamed for it.  It troubles me, for I have come to realize how closely these prejudiced attitudes come to mean-mindedness and even cruelty.  They are a form of discrimination that can lead to a subtle xenophobia, bigotry, and even bullying, or the epidemic fear of “otherness”.

Lately, while thinking about all this, I had a memory from long ago.

When I was in High school, I ran with the “popular” clique of girls.  I frequently heard them make disparaging remarks about some less fortunate kids.  Especially, there was one girl who was quite plain looking, dressed poorly, and was clearly not very bright.  She was quiet, kept to herself, but always kind and gentle.  My friends in the clique made fun of her behind her back and called her by a silly nickname.  I felt uncomfortable about this, but never spoke up since I wanted to ‘belong’ and feared their mean teasing might turn on me!  I even laughed with them about her.

Yet, whenever I encountered her on my own I would smile and be friendly.  I learned to know that she was sweet and kind, but painfully shy.  I found some empathy for her as I was also quite shy and timid among strangers, though I put on a good charade of confidence.  But I still never spoke up on her behalf to my friends.

Then, much later when we were adults, that girl… now a married woman with several very handsome kids and a loving husband… shopped at the store where I worked.  We renewed acquaintances and enjoyed some friendly conversations.   She then attended several of our high school class reunions, although she was still very shy around the group.   While others tended to overlook her, I made a point to visit with her.

Then a couple of years ago, her daughter came to the store and looked me up to tell me that her mother had died.   She wanted me to know that her mom had thought very highly of me and spoke of me as her ‘best friend’ from high school!

I feel chagrined to realize how I had complied with the subtle bullying she received, yet that she counted my meager smiles and friendly overtures as a deep friendship.  I feel emotional and shamed when I tell this simple story.  I have yet to comprehend the full depth of the lesson, but it has helped me recognize how and where I still retain some level of this childhood chauvinism.

Now I vow to confront and call out such bullying and subtle cruelty wherever I observe it.  In the current political climate of our country we are all victims of bigotry and prejudice at varying levels.   People of color; LGBTQ people; Native Americans and indigenous peoples; Women in general; people with disabilities; rural poor folks; the aged; people of religions different from white Christianity; and just anyone who is not part of the white male corporate millionaire elite class that now holds our government hostage.

But, as Americans, we are also guilty of our National prejudice of privilege.  We are learning to see how our pride has kept us from recognizing the pain of others.   We, the People, are challenged to empathize with the suffering of strangers; to reach out and share our rich land and culture with those now escaping from violence and tragedy in their war-torn lands.   If we don’t help them and keep our country free for all, we may soon find ourselves running in search of safety with them.

I am an eclectic artist and writer, retired from a 35-year career as a PhD sex therapist and counselor at the University of MN Medical School, Program in Human Sexuality. Since retiring in 2005, I have devoted myself to hobbies and pursuits in various art forms and in writing. My art and writing both tend to focus on subjects of women's spirituality and occult mysteries, I read voraciously in most genres, but mainly Occult and urban fantasy, historical fiction, and non-fiction alternative history and religions from female perspective. In addition I am a lover of cats, with five at home with me; an avid collector of fashion dolls; a sewer and creator of art quilts and other fiber arts; a hap-hazard flower gardener; and a retired professional astrologer.
View all posts by Manywoman →
This entry was posted in Uncategorized. Bookmark the permalink.

The Muse in the Mirror
Silent Vanity 'E'

The author of an action-packed post-apocalyptic thriller with a flavor of arctic magic.