WHY SO MUCH HATE IN OUR GREAT FREE COUNTRY? 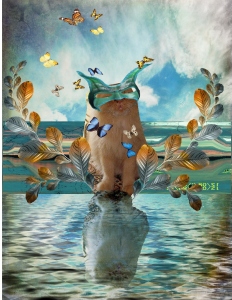 TO REJOICE OR REBEL?

I meant to be writing a blog about the season of Leo… a time for enjoying the pleasant things in our lives… such as romance and play, creativity and beauty, love and joy.

It is a lovely sunny day and I have spent time enjoying the rustic beauty of my wildflower garden while reading posts on Facebook.  But my mood is melancholy.  I rather desperately search my mind for inspiring ideas and cheerful thoughts, but continually find myself ruminating over negative articles and hurtful spite-filled conversations in the media and online.

So many people seem angry, vengeful, scornful of good leadership in the nation… for eight years there has been nothing but a solid stream of hate and complete disregard for our first black president, Barack Obama.   It has been a burgeoning cloud of pure Racism, hatred of people of color, fear generated through media and the war-mongers in congress… fear of anyone who is ‘different’ from the Great White Male’s self-proclaimed stereotype of a “Proper Leader.”

Now that Obama has completed his term, (having largely succeeded in leading us through eight difficult years with great dignity and decency, despite all the barriers thrown against him,) the Haters are turning their vile spume toward Hillary Clinton, the woman who stands to become our first female president.

This is a truly Big Moment… one to be celebrated by all women and girls and their husbands and fathers.

But instead I hear so many of them spouting the nasty rumors and slanderous claims put forth by the filthy bigots who lead the “new right” republican party and its minions.   Men and women reviving the ages old taint of misogyny… Sexism… hatred of female power.  The nation turns from Racist to Sexist and the hate goes on, gathering momentum, crushing optimism in its path.

Self-righteous gripes and slander parade as Patriotism. Mothers teach their daughters to revile this strong woman, telling them (as one mother told me she does) that ‘this awful woman is an example of what a good woman would never be like.’   Yes? This about a brilliant woman who has lived and served to help others for over thirty years under a constant barrage of slander and negative rumors.  One has to wonder how those little girls will turn out… will they take their mother’s bitter advice to heart, or will they discover for themselves what a bigoted lie was told to them.

It simply makes me sick.  I do not want to be here.  Yet I feel compelled to stick my neck out and speak up because I do not hear very many others doing so within the tiny sphere of my personal world.  It is as if no one cares or even bothers to pay attention to these important things in this profound moment of history that we are living through.  They make small talk, and worse, they speak of Christian morals and pray for terrible things to happen.  It is so insane.

I deeply fear that we have at last come to the brink of collapse as a nation.  The unspeakably ignorant and malicious person that the republican extreme right has managed to manipulate into the top position could become our next president instead of a level-headed experienced woman!

This could easily spell The End for democracy.   We would have a dictator for president!  The unimaginable demagogue who essentially knows nothing about leadership and only ever works for His Own good with zero consideration for how his actions could hurt millions of people worldwide… this creature would have his finger on the ultimate weapon, would be in charge of the greatest nation on earth!  His billionaire ‘handlers’ are the source of true evil, of course, and have been working toward this very end for many decades.  Now they have finally succeeded in contaminating enough minds among public sheep who will follow them right to their own slaughter.

I am old enough that I may not live to see the end of this, but I fear for the children… The nay-sayers are self-assured that God will take care of them and that “it is all God’s will” …a bunch of Christian zealots eagerly awaiting Armageddon.

I want to puke.

It is so hard to live with this bitterness inside me.  I don’t know how those who are the targets of such venomous hate can bear it.   It takes a tough and determined and dedicated person to hold strong through the cacophony of such maligning, threatening, degrading spiteful voices.

I only need to get this off my mind.  This is not yet enough said… the whole prospect of the next three months is simply heart-wrenching…  We have no idea how this vicious campaign will run out… we could be in for some great good surprises, but I fear more hateful attacks and nasty bigoted slander to feed the ignorant people.   I aim to keep posting realistic views, accurate reports and a hopeful attitude in spite of the fact that so few bother to read, nor even care to think for themselves.

But, to return to my originally intended subject, here are the “Themes” for the astrological season of LEO:  Although I wrote this in 1990, I think we can find some relevance in them now, nearly twenty-five years later.

Note:  As I read through the two lists below, I am struck by the stark contrast between the ‘negative’ and the ‘positive’ sides of the prideful sign of Leo…  and how at this moment they mirror__ in somewhat simplistic, exaggerated sense__ the differences between the man who is current Republican presidential candidate… Donald Trump; and the woman who is our first woman candidate for President of the United States… Hillary Clinton.

THE SEASON OF LEO IS A TIME FOR PLAYFUL CREATIVITY AND CELEBRATION.

The energy of the Lion’s season is imposing and hard to ignore.  The sun, in its glory, casts a golden mantle over the landscape, warming and cheering all who have hearts open to receive the blessing.  There is a regal splendor in this season which impresses us with the infinite grandeur of life and our home planet’s noble majesty.  Leo’s magnanimous force impels playful sharing and creative pleasure.  Yet Leo is a sign with great ego and a dramatic urge to take center stage, to seek applause and attention for ourselves, to make our mark and leave our imprint on the world.

AN OPTIMISTIC BLESSING FOR LEO:   May the light in your heart shine brightly for the joy and pleasure of all life.  May your inner child come forth safely into your daily world to play and rejoice in the beauty of the world.  May you be able to encourage and praise yourself for the special person you are, and reward your talents with the applause of a happy heart.  May you find time in your life to be at leisure to pursue your personal bliss; to vitalize your special brand of sunshine; and to find moments of genuine happiness through the creative expression of your unique gifts of self to enrich the lives of others.

I am an eclectic artist and writer, retired from a 35-year career as a PhD sex therapist and counselor at the University of MN Medical School, Program in Human Sexuality. Since retiring in 2005, I have devoted myself to hobbies and pursuits in various art forms and in writing. My art and writing both tend to focus on subjects of women's spirituality and occult mysteries, I read voraciously in most genres, but mainly Occult and urban fantasy, historical fiction, and non-fiction alternative history and religions from female perspective. In addition I am a lover of cats, with five at home with me; an avid collector of fashion dolls; a sewer and creator of art quilts and other fiber arts; a hap-hazard flower gardener; and a retired professional astrologer.
View all posts by Manywoman →
This entry was posted in astrology, Personal, Political, Season's Turnings, Uncategorized. Bookmark the permalink.

1 Response to WHY SO MUCH HATE IN OUR GREAT FREE COUNTRY?