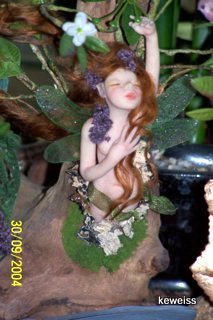 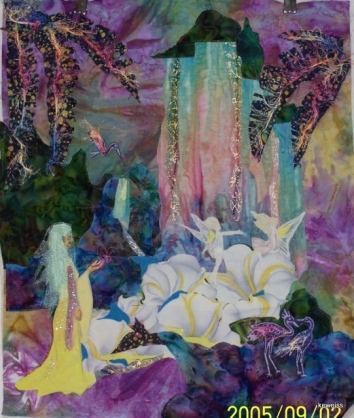 Today marks the ancient Gaelic festival commemorating the official beginning of Summer.  This holiday falls midway between the spring equinox and summer solstice (midsummer) and was traditionally celebrated in Ireland, Scotland, the Isle of Man, and elsewhere in Great Britain and Wales far back in history.  Nowadays it is mainly observed in modified ways by people who follow Neo-Paganism and Wicca.  I think it is a holiday primarily celebrated for the fairies!

In earliest Irish literature Beltane Is associated with fairies in the myths of pastoral folk.   At this time of year herds of cattle, sheep and goats would be driven out to pasture for the summer.   Bonfires were lit, often two separate fires side by side, to drive away evil spirits and appease the helpful (but often mischievous) fairies, who were believed to become especially active at this time of year.

Fire, as the element of spirit and creativity, symbolized fertility as well… fertility of crops and of animals and of the people themselves.  It was a celebration of ‘new life’ and of the anticipation of growth and well-being and prosperity.  Fairies and pixies were often blamed when things went awry or accredited when things went well with such matters.

Spirits were raised, metaphorically and actually, through the use of the great bonfires.  Cattle would be driven between the two gigantic flames to protect them from disease and promote their bountiful breeding.  Sometimes a selected animal might be sacrificed to a local deity if winter had been particularly harsh and extra blessings needed from the fey spirits who find great delight in the brilliant flames.

The people themselves also ran or danced between the flames for luck and protection.  They would inhale the smoke for purification and the ashes would be sprinkled over crops and daubed on celebrants faces. Then when the bonfires had burned down, folks might leap over the hot coals in contests signifying fertility, especially if they hoped to conceive or were already pregnant.

At last folks carried the embers or burning torches home, to re-light their hearths, (for all other fires would have been doused before the holy ones were lit.)  This assured a truly fresh start for the coming year and cleared away any bad spirits that might still linger in the exhausted cinders.

Other customs of the Mayday festivals include flowers and wells, both again associated with the fairies and with luck, fertility, and growth.   Wreaths of bright spring flowers were worn by young maidens; doorways and windows decorated with primrose, rowan, hawthorn, gorse and marsh marigold; or loose flowers would be strewn at entryways and along paths; or cattle and horses might be decorated with floral bouquets or wreaths.  The floral offerings especially please fairies aesthetic tastes.

Again, the symbolism of spring and of new growth and of the yellow color of sunlight all spoke to the importance of lengthening days and summer’s growth and blooms.  A special “May Bush”, small tree or branch, would be decorated with flowers, ribbons, shells, and then displayed competitively among neighbors to attract the fairies’ luck. The people would dance around the bush to tunes played on pipes and tambourines.  Tree dances still remain common throughout England, and include the merry and colorful Maypole dances of Medieval and modern times.

Wishing wells were originally holy wells where people went at Beltane and other times to pray for health or healing.  Offerings of coins would be left or tossed into the well for the fairies and spirits.  Food and milk offerings were left for them at wells and trees and doorsteps. It could be said that the fairies made a haul at Beltane, and happy fairies assured things should run smoothly for the folks who remembered them kindly through the coming summer.

So, remember the Fairies and leave them some treats tonight so they will treat you kindly and not play too many of their mischievous tricks.

I am an eclectic artist and writer, retired from a 35-year career as a PhD sex therapist and counselor at the University of MN Medical School, Program in Human Sexuality. Since retiring in 2005, I have devoted myself to hobbies and pursuits in various art forms and in writing. My art and writing both tend to focus on subjects of women's spirituality and occult mysteries, I read voraciously in most genres, but mainly Occult and urban fantasy, historical fiction, and non-fiction alternative history and religions from female perspective. In addition I am a lover of cats, with five at home with me; an avid collector of fashion dolls; a sewer and creator of art quilts and other fiber arts; a hap-hazard flower gardener; and a retired professional astrologer.
View all posts by Manywoman →
This entry was posted in Fairies, Holidays, pixies, Season's Turnings, Uncategorized. Bookmark the permalink.

The Muse in the Mirror
Silent Vanity 'E'

The author of an action-packed post-apocalyptic thriller with a flavor of arctic magic.