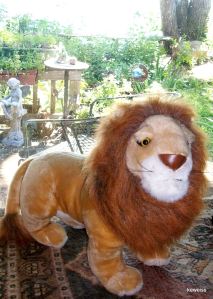 A MIND-SPINNING RAMBLE:
Today my mind is in a muddle and my rage boils over.

A KINGLY LION HAS BEEN MURDERED VIOLENTLY BY GREEDY MEN IN AFRICA. The lion’s name was Cecil. He was known as a gentle giant and admired by many who studied the lions. The news has caught fire on Facebook and all the mainstream news media. People all over the world are enraged by this thoughtless cruelty and vain slaughter perpetrated on a magnificent innocent beast in the wilds of Africa. To elevate the tragedy, we are told that this lion was the alpha in an area that was home to two separate prides. The second male lion will now kill all of Cecil’s cubs so that the female will mate with him. It is “nature’s way” which in itself feels cruel enough.

But a wealthy American dentist paid 50 thousand dollars to a couple of crooked “wild game hunter guides” to kill this popular, well known and regal animal for no other purpose than to have another vile “trophy” to hang in his man-cave at home in Minnesota. I live in this state and it shames us all that there are such men among us who have no conscience, no compassion, and no sense of decency… to be able to look at such a regal beautiful animal and think only of killing it! To even contemplate such heinous action makes me ill. I am comforted to see that I am far from alone in this feeling… to see that there are hundreds of thousands out there who agree with me. These men need to be severely punished. (In my rage I imagine taking them out into the wilderness, stripping them of all their clothing and weapons and leaving them there for the lions to deal with… the lions would soon have themselves a hearty meal!)

BUT THIS IS A HOLY TIME. Compassion and forgiveness are required now, not more hatred and blame. I am reminded that today is the beginning of LAMMAS… the annual festival of “First Harvest” and of gathering together in peace and compassion for all our fellow earth-beings, humans, animals, and every living thing. It is a time of giving thanks for blessings and having grand feasts and festivals of songs, dances, and joyful laughter in gratitude for the bounty in our lives. A time to share with others and gather together__ even in the midst of all the changes, turmoil, tragedy and uncertainty currently running madly throughout the world.

FOR, IRONICALLY, THIS IS ALSO THE SEASON OF LEO: The kingly lion of astrological lore. (Read more about the Season of LEO above, under Mystical Moments.) And the coincidence cannot be ignored. The killing of a magnificent LEO in Africa somehow mirrors and portends something about this moment in the world. There are no coincidences, we are reminded by all wise prophets. What we sow we reap. What we wish for we will always get, though rarely in the way we imagined. Life is precious and we have come to take it for granted. It is time. Time to learn to live in peace with all our fellow planetary travelers. If not now, then perhaps never, for there may not be another such moment. Things are on a brink… of what and to where none can truly say or even guess.

IT IS NOT MY NATURE TO BE SO PORTENTOUS and I feel very uncomfortable when I speak in such ominous and fateful language. But I cannot deny the feelings. It seems important to raise the conversation, to wake us all up, and to take action in our own lives toward creating a peaceful world. Stop the killing. Quit making excuses for it. Wake up and smell the stink of rotting souls. Yes, I am being vulgar. So what. Nothing compared to the vulgarity of senseless killing…. Not just of animals, but of our fellow human beings on the streets of America! The mindless hatred of those who are different than ourselves. The pitiful greed that drives men of power to rob and cheat the helpless poor and elderly. It makes me want to vomit.

BUT THERE IS GOOD NEWS TOO. TONIGHT, (JULY 31, 2015) IS THE BLUE MOON! (Every so often there is a month with Two Full Moons. The second one is magical.) This one sits in the sign of Aquarius, sign of universal consciousness and futuristic actions. It can also be highly open-minded and imaginative. The Blue Moon is a time to meet with the fairies and other good spirits of old. IT is a time for dreaming of better things, of listening to the voices of higher mind, of seeking the visions of beauty, of hearing the music of the spheres. It is a time for romance, yes… but also for loving the Earth and all Her Creation.

This is indeed a portentous moment in the sense of a Higher Consciousness as well. Many people are becoming more aware of higher powers and deeper forces directing our lives, powers and forces that are making themselves known by sensitive souls who study and travel and learn more about our ancient roots… about where we really come from, and about how to return to those wiser, more compassionate ways.

Goddess Bless us all.
RIP dear Cecil the Lion.  You shall not have died in vain.

I am an eclectic artist and writer, retired from a 35-year career as a PhD sex therapist and counselor at the University of MN Medical School, Program in Human Sexuality. Since retiring in 2005, I have devoted myself to hobbies and pursuits in various art forms and in writing. My art and writing both tend to focus on subjects of women's spirituality and occult mysteries, I read voraciously in most genres, but mainly Occult and urban fantasy, historical fiction, and non-fiction alternative history and religions from female perspective. In addition I am a lover of cats, with five at home with me; an avid collector of fashion dolls; a sewer and creator of art quilts and other fiber arts; a hap-hazard flower gardener; and a retired professional astrologer.
View all posts by Manywoman →
This entry was posted in Personal, reflections, Season's Turnings, Uncategorized and tagged Aquarius, BlueMoon, Cecil, grief, hope, Leo, lion. Bookmark the permalink.