Flower in Her Prime 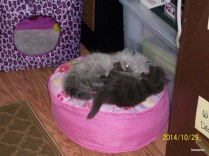 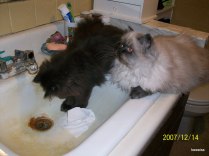 TT and OB Love to play in water 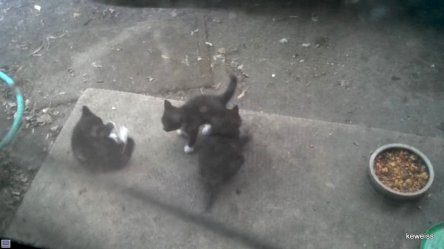 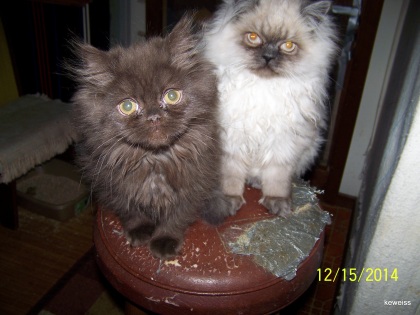 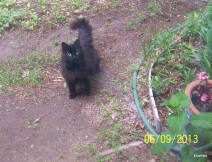 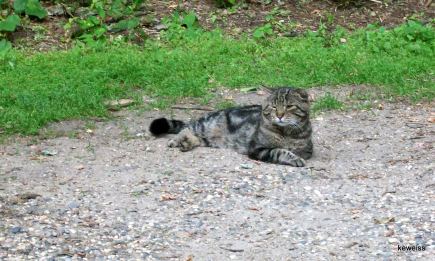 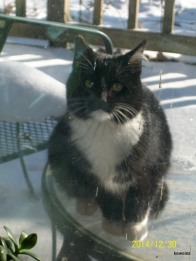 MY LIFE IS RULED BY CATS

Cats have taken over my life.

Suddenly in the past week my oldest cat, Flower, has deteriorated terribly with kidney failure. I would (should?) take her to be euthanized, except that she keeps rallying and eats voraciously. Her kidneys are failing and she has suddenly bloated to the size of a soccer ball. So her hind legs can barely carry her weight. She walks a few steps and collapses, sits for a while and then picks herself up and goes a few more steps. In this way she travels between the laundry room and kitchen. She squeezes into a little sleeping cube and curls up in there for hours. Then she rouses herself and hauls herself out of there to drink water, go sit in the litter box (and falls asleep in that too). But before long she appears in the kitchen, bright eyed and bushy tailed, looking up at me for a treat of raw hamburger whenever I open the refrigerator door.

She is 15 years old, has always had a terrible matting problem with her coat and now carries a lump of snarled fur on her back equal in size to the bloated stomach. I feel so sad for her, yet I believe she needs to do this in her own way. She has always been a very self-sufficient and independent cat. She hates to be handled at all and has great traumatic hissy-fits when we have tried to shave her awful coat or groom her. But I still love her.

At the same time, I am increasingly concerned about the outdoor cat situation. The dominant queen, Spot, has chased out my favorite black and white girls and their three brothers, all of whom were neutered and spayed and had grown relatively tame. I especially miss the twin bi-coloreds, Bootsie and Soxy. They did return briefly over a period of a couple weeks, coming to eat and get petted when other cats were away. But now the three litters of kittens are about four months old, and running wildly all around the carport and yard. (Trampling some of my good plants in the process!) I think my girls simply fled from the bedlam of the crazy young kittens. I am hopeful that they might return again when I get rid of this bunch, though I don’t know yet how I will do it.

The other two mother cats remain with the kittens, but the bossy black one is gone away in the last couple days. A big new tom came to visit one day and she left with him. That means she is going to be pregnant again and will probably bring another litter here in the fall!! She is far too wise to get trapped and I feel helpless about how to deal with these unwanted kittens. I want my nice tame bunch back!!! I think my best option may be to simply stop feeding at all. That may force the whole bunch to go and find another place to hang out. It would be hard for me to resist giving them a ‘treat’ now and then, but I can’t afford to keep live-trapping and paying for surgeries.

As if I wasn’t already at the end of my rope, today my ‘baby’ girl, Titi, got overly rambunctious and knocked down a decorative figurine on which I hang earrings. The feet of the figurine broke off and several earrings were broken as well. I raged at her and chased her all over until finally catching her by the tail. I threw her into the laundry/study area and shut the door. She stayed “imprisoned” for several hours until I had to open the door for Flower. Titi is lightning quick, and of course she darted back into the house. This was the third thing she has knocked down and broken this week! In all the twenty-odd years that I bred Himalayans and Persians, (often having a dozen or more cats in the house at a time) I don’t recall anyone ever breaking a single thing! I used to marvel at how deftly they could move among a group of delicate objects and not disturb anything. Titi is a clutz! (Cute as a button though.)

Her brother, Obie, on the other hand, is a gentle giant. He can hold her down if he wants to, but he will let her jump all over him and bite his ears and wrestle very roughly. Other times they lie together and groom each other, then fall asleep curled in tandem. Titi can also be the most loving little cat with me when she wakes me in the morning, or when she is sleepy and tired of playing. I wouldn’t want to be without either of them.

My two other house cats, Jezabel and Spooky, are both 14 years old and still going strong. They are gentle with the young kids and quite tolerant of their mischief, yet they take pains to avoid being around when Titi is running her wild streak. They are simply wise, loving, and patient cats whom I adore and cherish like dear old friends.

They seem to know that their pal, Flower, is failing. Both of them will occasionally go and sniff her and give her a lick. It is heartbreaking. But the cats do know about death. They have seen others go in the past, and Flower, like several before her, will “go” when she is ready. I feel it is usually the kindest way to let them die in their own time. Only when they show that they are hurting badly and suffering too greatly will I take them to be “put down.” Not all pet owners agree with this, but to me it feels like the most respectful and loving way to say goodbye.  Cats are most attached to their home and traumatized to be taken away from there.

Just now, as I was writing, little Titi came to sit on my lap. She needed assurance that I still love her, though I doubt she is apologizing for her naughtiness. I cuddled her for several minutes as she sat purring, her eyes shut in a happy cat-smile. Then she jumped off and went to lie down for her afternoon nap. Perhaps I will take one now too.

PS:  If you would like to read more about the outdoor tribe, check out the sub-page under the “All About Me” Page in menu at top of the blog main page.

I am an eclectic artist and writer, retired from a 35-year career as a PhD sex therapist and counselor at the University of MN Medical School, Program in Human Sexuality. Since retiring in 2005, I have devoted myself to hobbies and pursuits in various art forms and in writing. My art and writing both tend to focus on subjects of women's spirituality and occult mysteries, I read voraciously in most genres, but mainly Occult and urban fantasy, historical fiction, and non-fiction alternative history and religions from female perspective. In addition I am a lover of cats, with five at home with me; an avid collector of fashion dolls; a sewer and creator of art quilts and other fiber arts; a hap-hazard flower gardener; and a retired professional astrologer.
View all posts by Manywoman →
This entry was posted in Personal, reflections, Uncategorized and tagged Bootsie, cats, death, Flower, kittens, Obie, Spot, Titi. Bookmark the permalink.